The XXXV International Congress “New Technologies for Diagnosis and Treatment of Gynecologic Diseases” with Endoscopy Course was held online on June 07-10, 2022 in Moscow 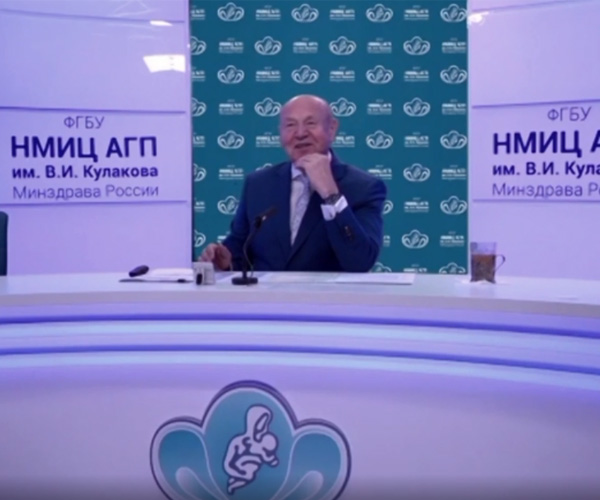 The Congress was streamed from the RIA NOVOSTI (the Russian News and Information Agency) studio and the studio of the Center itself.

Gennady Sukhikh  – Professor, Academician of RAS, Director of the National Medical Research Center for Obstetrics, Gynecology and Perinatology of Ministry of Health of the Russian Federation;

Congress Opening was marked by the greetings of Mikhail Murashko – the Minister of Health of the Russian Federation. He emphasized the important role of the event on the scale of the international health care, and shared the results of federal projects and the goals set for the national medicine.

The participants of the Congress were also welcomed by the Head of the Federal Service for Surveillance in Healthcare Alla Samoylova and Academician of RAS Galina Savelyeva.

Three of the four days of the Congress opened with Endoscopy course including special sessions on technical innovations, nuances of surgical energies application, features of reconstructive surgery, and suturing techniques.

The Congress program featured Experts’ school on hysteroscopy, which covered the use of bipolar resectoscopes in office surgery, as well as the gold standard of diagnostic and operative hysteroscopy.

Besides during this year's Congress 11 plenary sessions were held. They focused on such issues as diagnosis, treatment and rehabilitation in endometriosis; new technologies in reproductive medicine; innovations in gynecologic surgery, obstetrics and oncogynecology; endocrine aspects of gynecologic diseases.

A very special place was dedicated to key lectures on the role of artificial intelligence in robotic surgery, and on how to predict and manage with complications.

Traditionally the Young Scientists’ Contest was organized as part of the Congress.

The panel of experts judged the scientific research works and developments for the treatment of gynecological diseases. Among a large number of contest applications, it was decided to award prizes to 4 most promising works:

3rd prize – Kabolova K.L. (32 y.o., Russian Medical Academy of Continuous Professional Education» of the Ministry of  Health of Russia, Moscow), «The role of hormone indicators in differential diagnosis of hypogonadotropic hypogonadism and  constitutional delay of puberty in girls»

According to official statistics, 3723 attendees from 30 countries, 489 cities and 84 regions of Russia enrolled for the congress.

The total number of views on YouTube and the official Congress website over the four days was 14 791. Around 2000 people joined the stream via the website (1600-2000 via YouTube) daily. Dozens of positive reviews and comments were received as well.

The Congress got accredited by CME.

The Organizing Committee expresses gratitude to the Center’s Departments of International Cooperation, of Scientific and Educational Programs, of Telemedicine and Information Technologies; to the team of RIA Novosti broadcasting studio and the Congress Operator MEDI Expo for great contribution to the preparation and holding the Congress.